This is the story of how I became part of the Gion Matsuri (祇園祭).  Not just a spectator this time, but an actual participant!  Yes! A Filipino in the Gion Matsuri! #proudfilipino right here.  Hopefully, many of you could experience what it feels like to be part of this in the future!

Matsuri (祭) means”festival” in English.  So the Gion Matsuri is a festival which happens in one of Kyoto’s oldest districts, Gion.  There are a string of events running from July 10 to July 24 every year.  However, the three main events usually occur on the three Sundays during the above dates.

The first one is dubbed the Omukae Chochin (July 10; welcoming lanterns) which serves as the beginning of the festival and was the one I joined.  The second one is the Yamaboko Junko (July 17; Grand Parade) and Hanagasa Junko (July 24; umbrella parade).

The opportunity was out of sheer luck since the school was inviting students for part-time jobs as parade volunteers.  One of my friends came to me and invited me to join.  Everything was to be provided for (bento and yukata) and it was very hard to resist the chance to be part of one of Japan’s greatest festivals.  At first, we were skeptic of being accepted due to language barriers but my friend gave me some pre-interview training in Japanese in order to ensure that I could be able to answer questions.  All those Japanese classes are finally showing their value!  What’s more interesting is that there are no rules (that we know of) against foreigners volunteering for the festival.  Although knowing Japan, there must be some kind of limit to it.  Nonetheless, we were happy campers and waited anxiously for July 10 to come.

The process was quite easy: just show up in Yasaka Shrine on the arranged time and date and just present your ID.  The yukata (summer kimono) will be handed to you.  They were quite strict with undergarments though and everything had to be white.  After dressing up, we were given a nice unagi bento which should prep us for the work ahead.

At exactly 3pm, an old guy called out our numbers and arranged us in formation.  The numbers were assigned on (what we believe) the basis of companies who sponsored the event.  We were quite nervous as we patiently waited for the lanterns that were going to be assigned to us.  We ended up not carrying any.  Little did we know that we had to pull some sort of musical lantern cart later on!  After all the arrangements were finished, it was time to commence the parade.

*I would have to give full credits to my friends Yan, Eki, and Xiaotong for taking all these awesome pictures for us.  Thanks guys!

Here is a photo showing us pulling the cart!  We were numbers 4, 11, 12, and 13 which meant that we were almost in front of the entire parade.  And yes, the cart was very heavy but the group effort made it fun and enjoyable.

There were various chants from the back which complemented the drum beating that occurred in front.  The hardest job was being the one who pulled from the center because you had to steer and make sure that it did not stop.  We all took turns for this task.  Our arms were trembling after the parade.

It was very nice to experience being part of this traditional Japanese festival.  We could really feel that we were Japanese.  Even the Japanese friends we made during the parade shared similar feelings as well.  The level of organization, discipline, and commitment were truly Japan.  Our fellow Japanese participants were surprised that we were foreigners and were happy to chat with us along the way.

Here, we just passed OiOi Kyoto and into the busy Shijo-Kawaramachi intersection.  The center of Kyoto was looking at us! 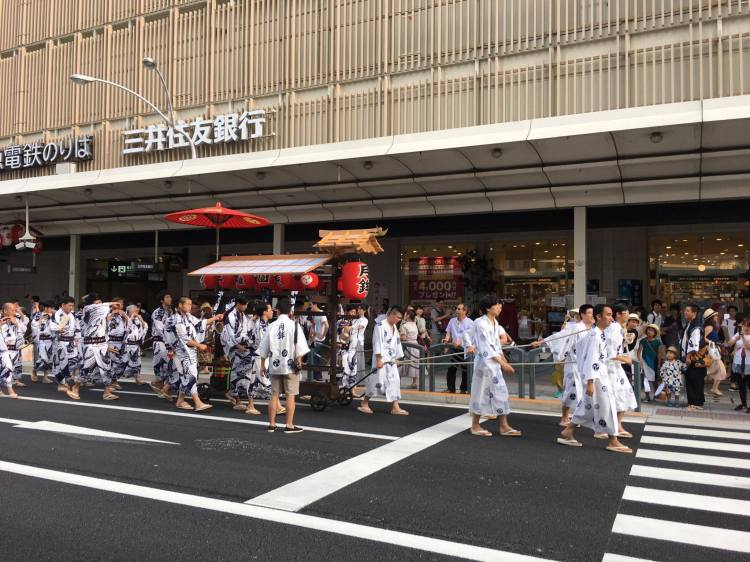 Our friends zoomed in!  China, Indonesia, Philippines, and Taiwan represent!

The intermission was at the Kyoto Municipal Hall where politicians gave speeches.  Wonderful performances by kids were in display as well.  Sadly, we did not have a lot of pictures of them.  More men in yukata pictures then!  The girls love it!

Some of the lanterns that were part of the parade.  Since these guys were at the front, their lanterns said omukae which translates into “welcoming” in English.

After the intermission, it was time to head back to Yasaka Shrine.  Obligatory group photo, of course!  Thank you guys for coming!  楽しかった!